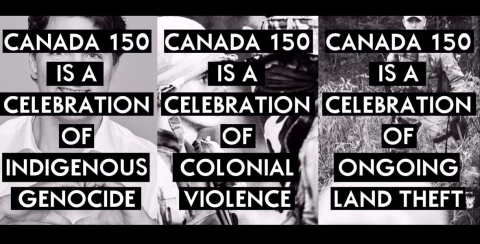 Canada is Racist too

The shit that happened in Charlotte this weekend is … What? What really IS it? Is it a sign of impending civil war, a change of minds, or a more divisive country? Whatever it symbolizes it, it isn’t new. This display of right wing terrorism is as American as apple pie. It has just been quieter, and easily glossed over since the civil rights era, and nine eleven but it isn’t dead. Trump has emboldened that which has been lying dormant for a few decades.

So what does this mean for Canada? What do WE do with this?

I admit, it is easy for us to bathe in a feeling of superiority as we watch the USA tear itself apart with a smugness and glee. However, we need to remember that we are not better than the USA. Trump’s fucktarded brand of machismo, misogyny and racism has emboldened the scum here in Canada too. Rather than focusing on this we are allowing ourselves to be distracted by the USA, and their dumpster fire.  When we should really be focusing on our own dumpster fire, which may not be raging, but it has been a slow and steady burn for decades. The collective ignoring of these problems are allowing our country to fracture further rather than knitting ourselves back together.

I admit, our racism game is not as strong as the USA. While racism and white superiority was one of many threads that helped give birth to Canada – it wasn’t the foundation like it is in the USA. We may have dabbled in Jim Crow racism like the USA, but it did not remain fashionable practice, even if it still occurred in Canadian’s hearts and actions. In Canada black people have definitely faced racism and hardship; there is no question about that. We had slavery and segregation whether we want to face it or not, it did happen. These tendrils of racism are still widely felt in Canada.

Canada’s favourite brand of racism however, is that against our First Nations people. We started with genocide, both literally, and culturally. We tried to wipe them out, we gave them diseased blankets and false promises. We shoved them onto reservations and took away their dignity and land. We were not satisfied with this, oh no. We proceeded to steal their children and force them into residential schools, which have caused ripples of trauma and addiction that are wrecking havoc and misery on the community today.  We also outlawed their culture, abused First Nations women, stole their culture, and constructed a quiet racism that prevents them from healing today.

Residential schools ripped out their native tongues, and forced them to abandon their souls for the white Christian dream. A dream they did not want, but never less were forced to endure. They were raped, abused, degraded and neglected all because they were the “savages”. Their Christian keepers believed they were the saviours, when really, they were the monsters. They did untold damage, and ruined lives. Third and fourth generations today are still feeling the effects of what were done to their ancestors. They hold within in them the addiction, the anger, and the lost dreams of their people.

The push to assimilate First Nations people did not stop at Residential schools. Their cultural practices were banned as well. One of the ways they did this was by banning Potlach ceremonies between 1885 and 1951. This ban prevented First Nations people from participating in a time honoured traditions that allowed them to celebrate births, and mourn deaths. Where they preformed naming ceremonies and gave gifts and celebrated.  Although some still preformed Potlach ceremonies in defiance, or by the ways they found around the laws – it was mostly silenced until the ban was lifted.

I would say out of all citizens of First Nations tribes, women faced the harshest, and most degrading treatment historically, and currently.  Family wise they faced stereotypes that resulted in their children being ripped away from them and forced into residential schools. In what is now called the 60s scoop, women had their children removed from them involuntarily and forced into adoption/foster care during the 60s and into the 80s. The Indian act which was in place in 1869 stated that a first nations man may marry whomever he chooses, and can pass his status on to his spouse and their children. If a woman marries a white man she lost her status, and was forced to leave the reservation. Then Bill C-31 was passed in 1985 and women were allowed to have status once again, and it could pass on to their children; but not their children’s children. In recent years it has been amended and generations have been added but it still remains discriminatory towards women and their families.

A First Nations woman’s body was also constantly a thing of sport. It was, and continues to be fetishzied and sexualized. From the rape, and murder they were subjected to by the settlers, to the murder, and rape of these women today their bodies have always been seen as something to be used for pleasure and consumption. Which makes it especially galling and disgusting when you see stupid white women wearing “Squaw” and “Indian Princess” costumes. They claim that they are doing it out of respect and reverence for the First Nations culture. Which is total fucking bullshit, they are doing it because they are ignorant cunts who have zero respect or understanding of history. They refuse to acknowledge how damaging that imagery was, and continues to be for these women.

This is the same for fucktarded individuals who think it is perfectly acceptable to wear a war bonnet/head dress; especially here in Canada. You have a group of people who have never been protected, or respected. They faced a cultural genocide, lost native languages, and had their practices outlawed – but we white folk only see it as shits and giggles to wear something so sacred. This speaks to insidious quiet racism we Canadians heap upon our first nations people.

All of this brings me back to my original point. We can poopoo Americans and their out and proud racism, but we should really be taking care of our own. Racist insults should not roll so easily off the tongues of people in polite conversation as if it is just a truth, rather something birthed from a history of injustice and hatred. We mock their addictions, and their poverty. We warm ourselves by saying “at least it isn’t us”. We steep in quiet superiority and tell them they should just get over it, that it was in the past – even tho we refuse to accept it is also the present. We spew poison about the taxes, and land rights requests as if it is no big deal.

When we see the poverty they live in we are willing to be sad for them; but feel completely comfortable turning around and making hateful comments about them still being savages and stealing tax dollars. We as a nation honestly do not care about the plight of first nations people. It is something we allow to exist in our peripheral vision, but not something we want to deal with or acknowledge. Definitely not something we actually want to commit any sort of effort towards resolving as can be evidenced by the inquiry into missing and murdered indigenous women inquiry.

I know people like to say “well it isn’t me that did xyz” no. It isn’t. However, I firmly feel that by continuing to ignore what happened in the past, choosing to remain ignorant and uneducated you hold responsibility.  Our countries ancestors, and through our silence we are guilty of adding to their pain. We must force ourselves to change our perspective. We must stop seeing them as the source of their own woes, and see their point of view and understand their trauma.

We should all be working together to heal our nation. We should not be navel gazing, and watching the USA burn itself to the ground. We Canadians should live up to our reputation and work to make Canada better for EVERYONE.

I know that Trump has emboldened many to be hateful cunts here in Canada. Unlike the USA, I believe these people aren’t the majority here in Canada; they just scream the loudest. So if we keep working together like we always have. Work towards understanding people and their place in life rather than condemning them we may find ourselves in a better place.

Things to watch/read in regards to this topic

People of the Potlatch

Any docu by Alanis Obomsawin

I am especially partial to Kanehsatake: 270 Years of Resistance

More info on the 60s scoop