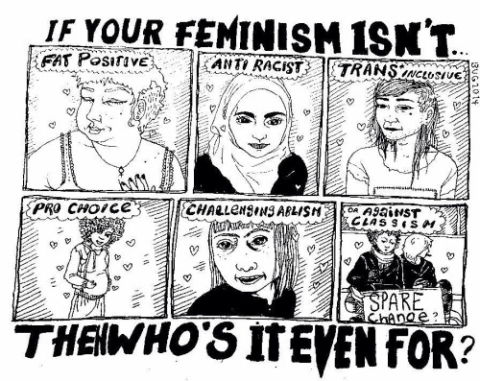 White Feminism needs to be dismantled. It is an insidious weed that does nothing more than silence, and choke out all other women’s narratives. Since the beginning, white feminism has worked for middle class white ladies, and worked against all other women. You would think that in this time period we would have finally come to a point where we made things more inclusive, but no. So when the 2nd annual women’s march occurred last weekend, I wanted to give a fuck about it; but I just can’t.

I am really fucking tired of seeing white women holding power, and refusing to share it. Their exposure to systematic racism is so complete that they cannot, or refuse to be an amplifying platform for women whose voices are often muffled or silenced. Instead, they stand there and shout token phrases, they wear pink pussy hats, and keep to their talking points. They claim to be there for their sisters, when they’re really just there for their cisters.

If you call yourself a feminist, and your feminism isn’t intersectional and trans inclusive then I am not sure if you can even say that you ARE feminist. I know that one of the big trends in 2017 was calling yourself a feminist, but… if you refuse to do any of the actual work to further the betterment of women – then what the fuck are you doing. Being feminist is not a fashion accessory, it is not some random meme shared to social media so you see yourself as “cool”.

Maybe I am being too harsh, maybe I am expecting too much but fuck. I just do not give a shit anymore. I think you need to educate yourself on the issues that impact all women. I think that as a white woman, who is feminist I need to step it up so that I can be an ally. Women of colour, and trans women have had to do so much emotional, and educational labour just to be seen as valid, to shout louder so people can hear them. I do not feel they should have to do that.

I think it is really fucking pathetic that white feminists are more than happy to say they’ve got the back of all women, until it inconveniences them or makes them uncomfortable. The minute they are confronted by a woman of colour that something they are doing, wearing, or saying is racist they immediately get their backs up. They make sure to explain away, or speak over any attempt to explain why it is racist. The biggest sin white feminists commit is that they do not listen. They do not want to admit or confront that they have any unconscious biases.

This brings me back to the shitfest that is the women’s march. I want it to be seen as this big empowering event. It has the potential to be so unifying and important. I feel like we are on the verge of something big, but I worry it is going to be AGAIN another wave of feminism that is primarily white. There were some great speeches, and I am not going to sit here and say that x’s trauma is more than y’s. All traumas are important, and valid. However, we just focus on white trauma; and in doing so we are ignoring issues that affect women of colour.

For example, over half of first nation’s women in the United States, AND Canada experience sexual assault. Other women of colour have higher numbers of sexual assault than white women. Their stories are so important, but we are ignoring them. In ignoring them we are also ignoring the wider issue that these women face that lead them to vulnerable situations.

In the sea of pink pussy hats, and rah rah vagina pride we are also ignoring another vulnerable group, trans women. I am not saying you cannot be proud to be a woman, proud to have a vagina. What I AM saying is that you need to be conscious of the fact that not all women have vaginas, but their lives are just as valuable and just as important. We need to move beyond this finite ideology of vagina = female. It is too divisive, and exclusionary. Trans women need our support, they’ve been carrying their pain and emotional labour alone for far too long.

So while I think the #metoo, and #timesup movement is all well and good, it is not enough. It is empty, it is hollow. There is no solution, just words. Standing up, and speaking out is admirable but when you exclude a whole segment of women, and their unique situations it’s worthless.

We need to be discussing how First Nations women are in crisis due to generational fractures in their community, erasures of identity, and racism that they have endured. We need to be talking about how these same women are going missing, and being murdered and fuck all is done because their lives are not seen to be worth the same as white women. It is crucial that we are educating ourselves and becoming aware of the issues they face now and historically so we can help. So we can heal.

We need to address the racism that exists in both the USA and Canada, and how it impacts women of colour. How the stereotypes that black women face about their sexuality, and bodies leave them vulnerable to assault, and have it fluffed off because of systematic racism. How motherhood for women with black children is more fragile than it is for white children, because of the same systematic racism. We need to talk about the other women of colour who face racism and unique situations that are beyond the scope of the white experience.

We need to support, and share the weight that trans women carry. We need to recognize that society, as a majority is still ignorant and hateful towards trans lives. That their bodies are constantly being policed, and discussed as if they were nothing more than a thing, rather than a person. Out of all women, trans women are often the biggest targets of violence due to toxic masculinity; their very existence threatening many men’s sense of “self”. We lose too many trans women to this violence, but also drug addiction and AIDS.

I think that facing the truth of all this is too much for many white women to contemplate; because if they do they have to admit they hold some culpability, and are complicit with their silence. We white ladies NEED to make ourselves uncomfortable, we NEED to face these unconscious biases. Then we NEED to get the fuck over them so we can become a useful ally. Education, and honest discussion without drowning out and silencing voices that don’t fit our narrative needs to happen. It is not acceptable to have all this access to information and still remain ignorant to history.