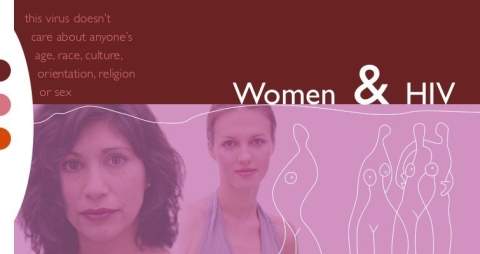 How the AIDS epidemic effected women

The AIDS epidemic is largely forgotten in our current time. It exists as a footnote in history; a misty memory of tragedy and loss.  I was just a kid when it happened and never really understood what it was. I didn’t find out till i was 18 that my uncle had not died of cancer as I had been told , but rather he passed away due to complications of AIDS. This revelation made me want to learn more about the AIDS epidemic, but I never actually sought out more information. So, when the opportunity arose to take a course with my favourite professor on AIDS and New Queer Cinema I felt it was serendipity.

During the course I wrote a paper on AIDS education posters geared towards women and it was exactly what you’d expect – a whole lot of ignoring women’s sexual agency and only equating sex with love and devotion. They also largely ignored women of colour, even though they were the largest at risk group. Ultimately this attitude left women at risk for infection, and at the time death.

The AIDS epidemic which approximately spanned the 80’s and the 90’s, butted up against backlash of second wave feminism. Women claiming agency over themselves and their sexuality had a lot of people in a dither. With this backlash it makes sense that the AIDS education posters would do their best to continue enforcing proper gender roles. Which, as mentioned earlier, they did by tightly weaving together the notion that sex and love go hand in hand. This equation of sex and love is nothing new for women, it is something they’ve been fed since they were a kid and able to watch Disney princess movies.

These movies indoctrinated young girls into believing that their mission in life is to grow up, find a husband, fall in perfect love, and get married. It has not been until recently that Disney princesses are showing some gumption. The most popular princesses still maintain this notion that a woman exists to please men. Little girls see this with princesses that need to be sweet, docile, submissive and change themselves to be liked by their one true love. Teen girls have films that show that the good girl gets the boy over any girl that may be too confident, and sexy. Romantic comedies continue this narrative, and add a new element – the bad boy. This is the troubled man child so desperately in need of a woman’s love and nurturing. He is the one who does not take no for an answer and pursues women relentlessly even when they say no.  The woman he is pursuing will eventually succumb to his wiles, and she will help tame his bad boy self. This all ends in a perfect happily ever after.

None of these stages tell the girl that she should be herself or explore her own sexuality. School, parenting, and other media influences in general avoid talk of a girl’s sexuality. Media and literature often show the female who expresses her sexuality, or enjoys herself being punished for doing so. Society at large would rather horde a woman’s purity, like Smaug hoards his treasure. At the time of the epidemic there was very little tools given to women to teach them how to have safe sex. This set women up for being vulnerable when it came time to have sex, and this combined with being told to be submissive to men – often women did not fight for condoms to be used.

This submissiveness is a trait that is constantly, and relentlessly encouraged for women. Men hold the power, and women are there to be looked at, and their bodies used for male pleasure.  This was especially problematic because women are told to only make love, and wait till marriage; men are raised to have a voracious sexual appetite and go forth and spread their seed. They are not restricted to equating sex with love. So when you get some guy talking a starry eyed woman into bed they may each have different expectations of what that sex will mean; and whether or not they are safe.

The most vulnerable communities for infection were women of colour, and poor women. Women in the Hispanic and Black community were the biggest at risk group for infection. This is  in large part due to religious and cultural traditions that were more heavy handed about maintaining traditional gender roles. This resulted in more guilt and shame that women would feel about sex, and having sex. Another layer to this was that some of their religious beliefs forbade contraceptives.

However, of the Hispanic and black community the largest at risk group for infection was black women. Over 50% of women with HIV during the epidemic were black women. Yet, as usual the focus was on the middle class white population. Leaving black women out of the narrative when they needed the most help and assistance. Ignoring the pain and suffering as America likes to do with their black population.

Of course the reality was that all women faced danger and risk due to ignorant doctors and regulations put in place. At the beginning of the epidemic doctors believed that women were inefficient and “incompetent” transmitters of the virus. One doctor believed a woman’s vagina was too rugged to contract the virus, while other doctors believed that a woman could hold onto the virus and pass it along to her partners. It was because of these thoughts that many women were led to believe they were safe from infection.

The truth, however, was that due to the vaginal mucus membrane women were actually more efficient than men at contracting the virus.  Women were so efficient  that they also got sick quicker and died faster than men.  For many women it was not until after they died that a diagnosis of AIDS is made. A reason for the lack of detection could be that women may have different symptoms than men when they are sick. One of the symptoms women have that men do not is cervical cancer, and because it is something that men did not have it was excluded from the CDC’s AIDS definition.  It was not until 1993 when feminist groups, and health advocates lobbied the CDC that the definition of AIDS expanded to include it under their list of symptoms.

The medical community further let women down when they excluded them from being part of the drug trails. This exclusion was due to a 1977 ruling women who were able to bear children were barred from participating in drug trials. Which is not really surprising given that for centuries doctors were frequently limiting what women could do just in case it damaged a non-existent fetus, or the chance of a fetus. . This meant that doctors were unable to tell how efficient drugs were for women, and how those women would be affected by the drugs. It was not until 1992 that the law was amended due to its discriminatory nature, and allowed women to participate in drugs trials. Even with this ruling however, many trials still did not have an even amount of women to men testing the drugs.

Ultimately, for women, societies systematic misogyny, and racism meant that they never stood a chance. It did not help that Reagan was a piece of shit and ignored the epidemic until it started effecting white people. He let his homophobia and racism doom thousands of people to their death. The sad thing is, that women still hold very little place in the narrative of the AIDS epidemic. If you were to guess based on how society today posits the AIDS epidemic you would think it was limited to white gay men. We really have not learned anything, and we are doomed to repeat our mistakes. This can be seen in the fact that HIV infections are on the rise. We need to teach our children better sex ed, and tear down the gender roles that leave women vulnerable.

(I have sources, good ones, but I no longer have the proper bibliography – my notes just have short forms .. If you are in desperate need of my sources I will figure them out for you… But for now.. Nah)

Here are a few of the AIDS education posters I saved while doing this assignment. If you want to view more posters you can go to the University of Rochester’s site