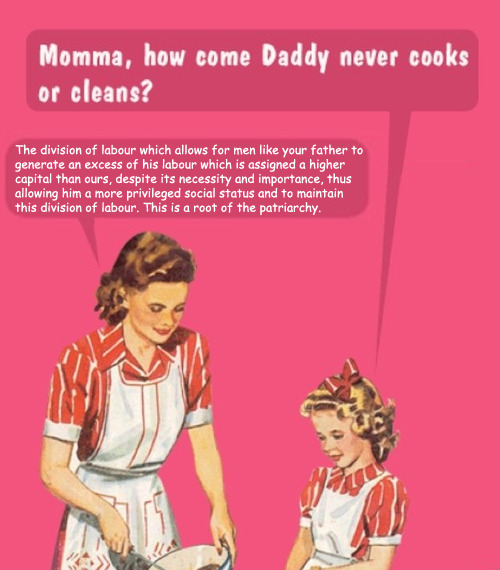 Riot against the House Angel

Women have been doing it for themselves for many decades now, and they have the battle scars to prove it. It is true they have access to more rights and freedoms than previous generations (but still have a long way to go). However, for whatever reason women are still beholden to the Victorian ideal of the house angel.  While it is true that most women are not standing at the door perfectly coiffed, with a martini and a smile; their work in the home, and their value as a stay at home parent is largely ignored. Insidious institutionalized sexism still allows for a narrative that values the man’s work outside the home, and has zero expectations for him to actually help out in the home. This ancient balance of household responsibility needs to be shut down, and burned to the fucking ground.

This topic has been ruminating in my brain for a few months now. It all started when I spent time at a friends place for an overnight visit. I found myself in absolute awe of her husband, and his unprompted assistance with their child. I felt like I was in the twilight zone. Then I got annoyed (not at him) but at the fact that I was actually surprised that a man is taking an active role with his child. What kind of fucked up shit is that?

It made me reflect on how normalized it is in our society to see the man as this useless partner. That if he offers minimal assistance he is seen as being worthy of a ticker tape parade. Whereas women are held responsible for every little detail of their child, and have historically been found at fault if anything goes wrong with the child. I know that not all men are useless partners. My little brother is a kickass father… but between him and my friends husband I cannot think of another friend with kids whose husband is an unprompted participant in the household, and their children’s lives.

I get that if you are a stay at home parent you are going to be more involved with your kid than a parent who works outside the home. However, why does the job description for a stay at home parent still include managing the home AND taking care of the kids 24/7. That they are somehow expected to wrangle children and keep a spotless home. Whereas the man who works outside the home feels that this gives them the right to do fuckall when they get home.

To me, when the working partner gets home from work it means the stay at home parent gets to end their work day too. That it is now time for family and getting shit done. Not fucking off to a man cave to watch tv and wait for dinner. I don’t buy this song and dance of “being tired” after working all day. I would argue that wrangling children, and keeping them safe and entertained is just as exhausting as any “outside” work. Stay at home parents may not bring in actual money; but it is just as valuable.

What is also baffling is that when a woman DOES work full time, she still carries the majority of the weight of child rearing and household management. The man is allowed to be seen as a child and incapable of helping. I do not understand why women have allowed this narrative to continue; maybe it makes it easier for them to normalize how fucking shitty the situation is for them. It is no wonder women are always fucking exhausted and at their wits end if they are never valued, or helped.

This value of the work women does goes largely goes unnoticed, or unappreciated. Especially the emotional labour, and logistic skills it takes to keep the day functioning. Even my friends husband, who is the sweetest man, fails at understanding this component of child rearing. The managing of schedules, and what goes into preparing for outings still falls largely to the women to organize. There are many articles that show the lists, and notes women have to write to their partners so shit doesn’t fall apart when they’re not home.

I know that some men embrace these antiquated gender roles, and others are totally unaware they’re following them. So how do we unfuck this? I know this is not a new discussion, but for the sake of the sanity and happiness of many women we need to find some sort of solution. I know it’s easy to say that men need to step up and get their shit together – but as with most things it is easier said than done.

I feel that a big step to deprogramming this mindset is that women need to learn to unclench. I know I cannot speak from personal experience; but rather observations and interactions with parents. However, I think a lot of mums feel that they are the only ones who can do it, and know it’s done correctly. That the entrenched notion that men are hapless makes it difficult for women to trust that they are capable. As well, I know that many women have a specific way of doing things, and they need to allow their partner to find his own way. As long as it is not harming kid, or anyone else just let them fall on their face.

Women being trapped in this mindset is really not surprising. From the time they exit the womb they are bombarded with gender binaries that enforce home economics as their responsibility. As adults media and social constructs are still gripping tightly onto these gender roles. Correct me if I’m wrong, but all housekeeping and parenting magazines are geared towards women. On tv shows the woman is the glue that holds the house together while her hapless helpless husband just bumbles around and makes life more difficult. How can we possibly move towards a point where a man takes as much a role in a household as a woman if society still refuse to change the narrative. If we still place the responsibility solely in the hands of the woman.

There has to be a breaking point and I believe we are getting to that point. There is a lot of conversations in mum groups and in articles written by women about how frustrated they are about their husbands not helping, about having to juggle all the balls themselves. I hear the same thing from some of my mum friends. It’s rather ridiculous and I cannot imagine having to care for tiny humans and being a partner to someone who either cannot, or will not help.

I believe as much as women need to learn to unclench, men need to learn how to be better allies. To be aware of more than just themselves and their own care. It should not rest on the shoulders of women to train men how to be useful. This insidious systematic sexism that exists in our society needs to be challenged. Media geared towards housekeeping, and child rearing needs to be gender neutral and cease focusing on women as the keeper of the house. Men need to be raised with the tools to manage a household and be held responsible for helping around the house. It is as much the responsibility of men who DO have their shit together, as the men who don’t to change this narrative.

The Victorian ideal of the house angel needs to be dismantled and destroyed. Women need to be allowed to be an equal partner in house maintenance, and child rearing. They should not have to nag their husbands to stop being a useless twat. They should not be the only person who knows how the house runs. I just wish there was an actual solution. I am not sure how to make men respect their partners. I still don’t know how to get through to a man that he cannot be a useless lump. I do know that women should be expecting more from their partners. That they should not allow this notion of a “child” husband be allowed. That they should expect their partner to let them end their shift as stay at home parent end when the man gets home from work. We need to demand better from our partners. They need to want to be respectful, and useful.