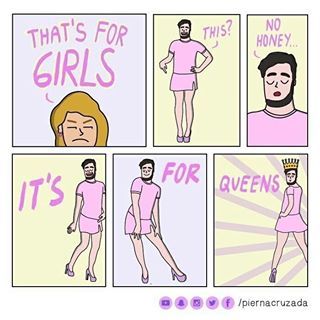 Sisterhood of the Travelling Fluidity

There is a well spoken phrase of “support your sisters, not just your cisters”, which I agree with wholeheartedly. It is an excellent reminder that we have to be mindful that not everyone is a cister. I think that it is time however that we move beyond the term sisters. I want to see us support our sisters, sometimes misters, and the nonconformisters. I know sisterhood is a protective circle that women have relied on for centuries to keep shit together. To make life work. However, it is time that we open up the circle to accept those who otherwise do not have a circle to fit into. I know this is a difficult proposition to ask women who are struggling with a myriad of traumas, and a life time of disappointments from those outside the circle of sisterhood to accept new people and a new community into their protected circle. I think that we can get there, and I feel that we NEED to get there.

First wave feminism threw poor women, and women of colour under the bus. Their bodies were nothing more than a means of economy and production. They were not people, and they did not receive the same consideration that privileged white women did. White feminists chose to further their own narratives rather than giving a hand up to poor women, and women of colour. Like now, they focused on very specific issues that affected them most (right to vote, right to own property etc), and ignored any issues that other women faced (poverty, racism, etc). Susan B Anthony who is seen as a shining example of the suffrage movement has an oft quoted line “I will cut off this right arm of mine before I will ever work or demand the ballot for the Negro and not the woman”. White feminism started here, and has been on going ever since.

Second wave feminism was a shrine of white feminism as well, but it did gain some ground on the war against women and earning some women a modicum of protection against male tyranny. However, even though they had a victory, there was a lot of people wounded in the fight. This resulted in men being the enemy, and this included transgendered women. I may not agree with why second wave feminists eschewed men, and as a result transgendered women but I do understand it. When you’re hurt, you want to withdraw, and seek safety. The sisterhood that feminism formed allowed them to feel safe from the men who had ruled over their lives previously, and often caused them harm. It gave them room to grow and continue to fight.

That this mentality and exclusion is still being carried forward into what may be a 4th wave of feminism is wrong, and hurts too many people. I do understand the frustration that men dominate the history books, masculinity is all the rage; and women and femininity are seen as lepers and something to be avoided. I understand that we do not know the name of some women from history because their husbands name was more important than their own. I understand that women only spaces like lesbian bars are being erased. I understand that during the AIDS crisis lesbian women were totally left out of the narrative; but the did a vast majority of the care work. The erasure of women is alive and well. So I can see the perspective of wanting to viciously protect the spaces that we have just for women, devoid of the potentially harmful male influence.

However, we cannot go on like this. Not if we want feminism to progress, not if we want to protect those who are vulnerable that we have too often left behind in our own self protection. Men, and masculinity are not who should be absent from our spaces, toxic masculinity and those male and female who ascribe to that mindset should be. It is them that we are at war with. It is time to form an alliance, and to be allies to more vulnerable groups who have no one to stand with them and make them feel loved and supported. The L and the G part of LGBTQ+ is what gets 90% of the attention (mostly the G). Sure, we give lip service to the rest of the group; but we often don’t put our support into action.

Maybe you’re thinking “well, maybe the gays should do it”. The sad truth is, toxic masculinity is alive and well in the gay community. The hatred of femme gay men is prevalent and harmful. Some femme dudes do not feel comfortable and safe in gay spaces because of the way they are treated and talked to. So why can’t we offer them a space to be as fabulously femme as they want to be, and feel loved and supported while they’re doing it. Allow them feel not so vulnerable so that maybe we can save a life or two by allowing them to feel like that belong and are part of something.

The straight, lesbian, and gay groups have historically shown trans folk the door. We need to take a sledgehammer to that door and bust it wide open so that they can come in. We need to stop talking about how trans lives matter, but then get quasi terfy when it comes to actually letting transgendered women belong and acting as if we are being magnanimous to let them sit at our table. It isn’t fucking right, they are women full stop, you don’t need to single them out. Let trans men join too, fuck knows the gays aren’t friendly to them for the most part either.

Those that choose a fluid approach to gender, or are intersex also need to have a seat at our feminist table. Like trans folks, we need to stop with the lipservice of pretending we are accepting, when we clutch our pearls when they join women’s spaces. They, like trans folk are vulnerable, and need the support that the feminist movement can give them. The sisterhood that we offer to help heal wounds, and bolster against the onslaught of hate they get on a daily basis. They need us, and we have allowed white feminism to go on for too long. It needs to fucking end.

We especially need to do better with women of colour, and queer women of colour. They are by far the most vulnerable group. The hardships are well documented and talked about. Yet, their issues are so often ignored and shoved aside. We have to stop allowing this narrative of “your feminism is fine as long as you’re one of us”. Fuck that, you need to do the leg work to educate yourself so you can understand what other women are going through. We need our feminists educated so they can give their voice and support to first nations women who are being picked off like their bodies are nothing more than fodder to protect white women from male violence. We need to educate ourselves so we can fight back against the racism that so many people face on a daily basis.

By rejecting anything that is masculine and male, and ignoring the specific issues that women of colour face we are sending a signal to so many people that feminism, and sisterhood is not a safe place for them. There are many women who are more masculine than they could ever be feminine. So by keeping up this rhetoric of male exclusion we are telling them that they don’t belong. That they are not worthy of our love and support. By remaining ignorant to women of colours struggles and history we are saying that we do not respect them or their stories.

This is not any kind of sisterhood I want to belong to. I want to create, foster, and belong to a sisterhood that saves peoples lives by giving them a community where they feel loved and supported, so they don’t see suicide as an answer to their wounds. So that we can stop having vulnerable and exploited women turning to sex work out of necessity or force rather than by choice. So that we can give them the strength and amplification to be heard loud and clear, rather than a footnote in a white feminist conversation. I want to our sisters, sometimes misters, and the nonconformisters thrive and grow in feminist spaces. I want them to be warriors with the full backing of feminist sisterhood so they can defeat their enemies. That is the future I want, and I will be damned if I let anyone stand in my way.