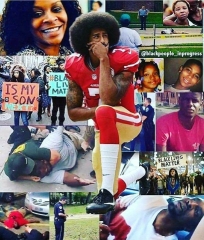 Taking the Knee – Protesting injustice and racism in America

There is a lot of hullabaloo going on right now about the NFL layers taking the knee during the national anthem. Many people are clutching their pearls and gasping in outrage; others are being angry and belligerent. I get this, I do… white privilege is a great blinder against the injustices that happen to people of colour. It is easier to believe everything is fair and equal than accept that America really is not the land of the free for everyone. If it was black people would not have had to spend centuries protesting the same issues, and fighting to be seen as valuable for more than entertaining white folks.

I guess technically Abe Lincoln “freed” the slaves. However, I do not think he is the hero everyone makes him out to be. He viewed black people as inferior to white, and wanted them shipped back to Africa. I do not think someone with views like that is really looking out for the best interests of black people, rather than their own self interest as a good Christian.

Black people may have been freed on paper, but I feel they just went from one form of slavery to another. They were set “free” without being given any skills to succeed or money to start out with. So they ended up indebted and owned in other ways by white people. White people who, for the most part still hated black people, and saw them as inferior. They did not want black people mingling amongst them like they belonged.

So right out of the gate black people did not have a fair shot at making a solid life for themselves. While there was some original support from white people to help them get established, this quickly went sour. In the 1890s there was an agricultural depression that affected many white southerners. Guess who got the blame for this? If you guessed the black people you are correct! So any small amount of warm fuzzy feelings that were towards black people evaporated. This misplaced anger helped give birth to the Jim Crow laws that segregated the south.

Fast forward to the civil rights movement and I know what you’re thinking – the civil rights movement was successful. They got what they wanted, and again everyone rejoiced and lived happily ever after. If only this was how it actually worked out. In reality, the systematic racism that gave birth to the USA was still alive and well, it just went underground – sort of. There were still everyday people, and politicians who felt it was perfectly okay to be racist assholes; they just recognized that they had to be quiet about it.

Since slavery ended many black people were pushed into impoverished areas that were not exactly a land of hope and dreams. So you have many black people living a life of poverty, and discrimination combined with the generational trauma that was never dealt with, or resolved. Unresolved trauma and pushing people to a point where they feel there is no hope can lead to addiction issues and violence. This coupled with the constant denial of white America to their culpability of this trauma has only deepened it. If you are constantly told you are nothing, and worth nothing you are going to start believing it.

The desegregated life of poverty and trauma helped give birth to the Blank Panther movement. They were not as nice about their protest as those in the civil rights movement. They were justifiably angry at the life black people lived. In response to these on going issues by black people the Black Panthers created a 10 point program in 1966, and it was never seen fulfilled. The list is:

Fast Forward 50+ years and these 10 points are still as relevant as ever. The USA has done fuck all to make any of this a reality for their black citizens. Many black people still live in ghettos and impoverished areas that make it difficult to flourish due to “…monopolization of ideal and material goods or opportunities by the dominant status group” (Lopez). These ghettos became America’s go to way to corral black people after Jim Crow laws ended. They operated as an “ethnoprison” that protected the white folk from being infiltrated and forced to see/socialize black people. An example of the disparity in quality of life and how these ghettos still impact black lives you just have to look to the water crisis in Flint Michigan. They are the ones that have been most affected by the crisis that has been on going, and ignored since 2014. It is only recently that it is starting to get attention, and support to fix the problem.

Another result of these ghettos is the crime and addiction that inevitably follows when people are constantly dehumanized and beaten down. Despite the popular belief through media and stereotypes that show black people as thugs, savages, and criminals they were not always the predominant residents of jails. It was not until 1988 that things began to change (Lopez). According to the NAACP fact sheet African Americans are incarcerated at 5 times the rate of white people currently. This large amount of black people incarcerated just further emphasizes America’s total failure of black lives. With this large incarcerated population, and slant of the media (who has never relented in their depiction of black people) the over arching view of black people in the USA is that that the men are thugs and criminals, and women are lazy sexual deviants scamming the system.

These depictions, and systematic racism allow for the seventh point to continue to be a huge issue in the black community. The genocide of black people has been unrelenting and allowed since black people were forced to America as slaves. Black lives have been taken violently, and justified in the eyes of the overall community. During the civil rights era black adults & children like Emmett Till received zero justice when they were murdered for alleged offenses, and the same goes for black adults and children today. Police officers brutally murder black bodies at an alarming rate in the USA, and get away with it. When black people erupt in protest they are shushed and told that they are just being uppity and have zero reason to be angry. They are told they should protest peacefully and without disrupting white society. They see Martin Luther King quotes taken out of context and twisted to fit the narrative white audiences want.

The world of sports is another area where white people allow black people to shine, so long as they mind the white folks rules. White people are more than happy to cheer for black sports stars, they will proudly discuss their accomplishments, they will cover up rape and other other assaults by black sports stars as long as they keep white folks entertained. What they will not be happy with is anytime that the black sports person has the audacity to use this platform to share the struggles of black Americans.

Which brings us to the point of this post. The absolute shit storm currently raging in the USA over black sports stars taking the knee during the national anthem to protest the injustices of black life in America. There is so much white outrage by average citizens, to the “illustrious” President of the USA Donald Trump. People whose blind patriotism and idolization of their country mixed with their ignorance for their own history makes them totally crazy in the face of any perceived slight on their glorious ‘Murcia.

Truth is however, the national anthem was written by Francis Scott Key who was a racist. He wrote the anthem as thumb nosing to black people. Black people who had the gall to join the british in hopes that they would get to be free. Although the third stanza that makes this racism very clear is not included in the performing of the national anthem, it is still an important part of its history. So why the fuck would you even expect black people to WANT to stand during that? Given that this racism has never gone away, and has only evolved.

The other thing that many of those outraged like to say is that this is somehow a slight against the US Troops. The cult of the American military has many members. There is an attitude that American soldiers are somehow mythical men of righteousness and valour. Conveniently forgetting the rape and slaughter of innocent people that these troops have engaged in throughout the world. They have already sullied themselves.

The other thing that is laughable about this whole outrage over the troops, is ignoring the history of black troops in the military. Soldiers who were forced to fight for a country that did not give a fuck about them. Yes, some black soldiers did fight in the hopes that it would some how make people respect them, or see them differently. Both those forced, and those willing returned from the war realizing that nothing fucking changed. Even though they served their country, white citizens did not give a fuck. They were still brutalized, marginalized, and segregated.

So taking all of this into consideration, are you honestly surprised they are taking the knee?  I am not, at all (obviously). I think this is an excellent teachable moment for the USA. A moment to step away from their white washed history and actually acknowledge and start to understand why black lives matter. Why black citizens are so fucking angry. Start to figure out a way to bridge the divide and make a move towards equality and reconciliation. That way black people 50 years or centuries from now do not have to be fighting for the same fucking issues.