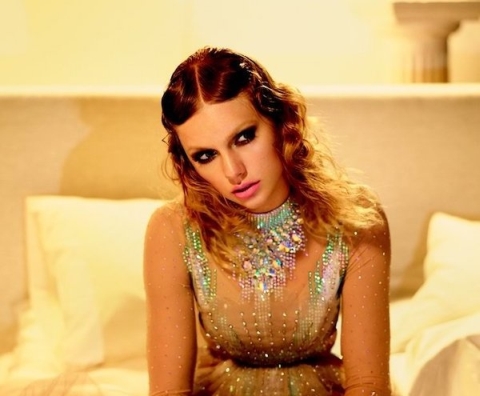 Taylor Swift and her Vulva of Steel

So one of my favourite ladies in music released a new song recently, you may have heard of them..her name is Taylor Swift. Since she released her song there has been a torrential downpour of hatred, and bashing. While I accept that there is valid points in some of the criticisms, I hold firm that the rest is total fucking bullshit. I am really sick and fucking tired of people labelling her as a perpetual victim, a snake, a whore, a slut what have you just for being a woman trying to make it in a world full of sharks looking for blood in the water.

At the core, the truth is that Taylor is a strong self made woman who works her ass of to preserve and maintain her brand. If she was a dude, we would not be having this conversation about her. Women in Hollywood, as in the music industry face undue amounts of pressure to be perfect. Running parallel to this pressure of perfection the media is also trying to slowly push them off a cliff. Sharing their views, or too much of their personal life generally results in devastating consequences. Anytime they may make an off the cuff comment about someone, or dissolve a famous friendship the wolves circle looking for an angle that they can spin a feud. They are in the ultimate damned if you do, damned if you don’t situation.

Taylor worked tirelessly to get her record contract, her family was behind her with it. Yes, she is lucky, she had money. She grew up with money. That does not negate the time and work she put into getting her record deal. She is talented, she writes her own music and she has a lot of creative control. She wrote her entire Speak Now album by herself as an effort to show that she has the ability, that she can do it. That was not enough, because she is a pop princess and ergo has no respect in the music world at large. We also tend to forget this and say she lacks talent, and shit on her ability to sing. No, she may not have the best singing voice but this does not mean she is not a valid artist.

The other criticism that gets leveled against her, as she addressed in her song Blank Space, is this relentless “oh she just uses men to write songs about her love life”, she is a “man eater”. Which is so fucking laughable. There are so many popular artists who have written songs, nay, albums about their breakups and past loves (Bob Dylan’s Blood on the Tracks, Fleetwood Mac’s Rumours, Joni Mitchell’s Blue to name a few). Do we shit all over them constantly and have that follow them for the rest of their career, and mock them anytime they sing another song about heartbreak? No. The dissolving of a relationship is a human experience, something we all go through. Taylor definitely is not unique or alone in using art to express her pain. It is just another way to shame a woman for having the audacity to have multiple relationships, and cheapen their contribution.

In regards to all those criticisms I say Taylor does not owe you shit. So many articles have been written about her from a person who has done zero research, only wishes to throw a blanket statement down and say SEE, I TOLD YOU. The truth is, speaking up when you’re famous comes at a cost. Again I mention the damned if you do, damned if you don’t – she cannot win no matter what she says. It will only be used against her to slander her further. She is a human being, not a machine; and as such is vulnerable being hurt. So it makes sense that she would not want to deal with the the scrutiny and immorality of the press (and possibly the government) if she decided to speak her mind.

One example how human vulnerability and being fried under the magnifying glass of the media/government for being outspoken can have devastating consequences is the life and death of Jean Seberg. She was a gorgeous blonde woman from Iowa who became successful actress. She actively spoke out, and contributed money to the civil rights movement,  and the black panthers. Doing this resulted in a lot of negative press, and the attention of the FBI. After surveying her and finding she was pregnant the FBI leaked false information about who the father was to the press. The press, of course, took that information and ran with it. The resulting publicity caused Jean to attempt suicide while pregnant. Later, she went into early labour and ended up losing her baby(a girl named Nina). Ultimately the pressure and the horrible shit that was levelled at her by the press ruined her career, and Ms Seberg’s mental state. She committed suicide on this day (August 30th) in 1979.

You can say, “But Brandilee, we are no longer in the civil rights years”. No. We are not. However, nothing has changed in terms of how relentless and vicious the press can be, and yjr further reach of the internet. Nor have things changed about what happens when a woman starts to voice her opinion, especially if it is against the current power. I think Taylor is smart to stay out of it, to continue as she has. She takes breaks when she needs to, and keeps close to those she loves. Call them publicity stunts, call them whatever you want. The truth is, she has learned how to keep herself healthy and sane. Sure, she does have a huge amount of power at her disposal. She could definitely be a voice of our generation and there would be lots of people who would listen to her. The question is, do we expect her to do this at the risk of her mental well being? Are we asking for a Martyr?

I feel too many women have been sacrificed to the fame god already. The entertainment industry has always been about taking pretty women (especially blonde women) and reducing them to a mentally struggling, chemical addicted “mess” (see Marilyn Monroe, Judy Garland, Britney Spears, and Lindsay Lohan etc). Those women never really come back from the breakdown, they may resurface but the shine is gone. Anytime they do anything of note to try and make a come back, they are slapped back down with reminders of their vulnerabilities splashed everywhere. Unlike men, who can do pretty much any heinous thing they want with no detriment to their career. Chris brown has the battered face of Rihanna tattooed on his neck like some trophy of his brutality, and he still gets praise and Grammy nominations.

The other difference between the ladies, and the dudes is that the entertainment industry, and media will do any sort of contortion act they can to create a feud. These feuds and petty squabbles between two famous women are an age old trope, they are often held together with bubble gum and a prayer. Anything from scratching your nose wrong in the presence of a potential feud mate can get you on the radar. Yes, some have used this to further their career. I personally think Tay has taken the high road on this. Yeah sure, she has her songs… but unlike some people… she doesn’t feel the need to constantly rehash it in the media. Regardless, these feuds are designed to keep women in line and play to the narrative that women are immature, catty and unstable. I highly doubt they actually exist in real life, on a day to day basis.

With all of this said, I will agree that it is a privilege to be able to stay silent. I do not think women in everyday walks of life should be silent, i think they need to use their voice and be loud. By doing this you accept the risks that come with using your voice.  This is clearly evidenced by the backlash against feminism since the first wave. Misogynists do not want to see women succeed, and will do pretty much anything to get it to fail. One of the way they do this is by taking any twisted, made up, or factual piece of a woman’s past and use that against her to take away from her cause.

With Taylor, the amount of fodder to use against her is massive. Way more than the average woman will experience. I can almost guarantee that no matter what Taylor said it would be twisted, perverted, and magnified. I do not think either side of the debate would be satisfied with anything she said. For example, so many feminists outlets were bursting with pride about her statements in the sexual assault trial. Then, a few weeks later they  turned around and eviscerated her when her video dropped. There is no true way for her to make a stand and not have it damage her in some way. As previously stated, I do not think her sanity is something she should have to sacrifice to make other people happy.

I will admit, white feminism gets my dander in all kinds of a dither. I do not think however, that silencing the conversation by berating them, and harassing them instead of trying to educate them is the way to go. I definitely do not think women of colour need to do the emotional labour in educating people. I do think that intersectionalist white ladies (like me) need to be taking white feminists under our wing and giving them the tools they need to evolve in their thinking. Pointing them to the books, journals, articles etc that can help them understand and shake them out of their privileged existence. I will admit with full honesty that I did not truly get why intersectional feminism was important until I had someone wake me up, and point me in a direction I needed to go. It sucks that we have to do that, of course it does. Everyone knows though that when you live in the white bubble you often fail to see what exists outside of it, and the experiences that people have because of it.

There needs to be some white feminist Hollywood outreach program to help people like Taylor get a clue. To encourage them so they stop taking feminist advice from people like Lena Dunham. I am not even sure which white ladies in the entertainment industry are intersectional feminists. So if all the white ladies do is sit around in a white feminist circle jerk shit is not going to change. Maybe Oprah can suggest a book club or something, and get them started.

Regardless, I think Taylor will keep doing her own thing flawlessly. I know a lot of people loathed her new music video, but me? I fucking loved it. Taylor always manages to deliver things in a tongue in cheek manner that shows she is in on the joke. It IS a joke. All of those scenes levelled criticism at all the stupid rhetoric in the media about her feuds, her “squad”, and her victim hood. The imagery she uses makes that very clear. I am excited to see what new Taylor emerges with this album. Unless she comes out as a Nazi, or in support of Trump I am not sure what could happen that would make me hate her.

To learn more about  Jean Seberg, and other dead blondes I would suggest you check out the podcast You Must Remember This