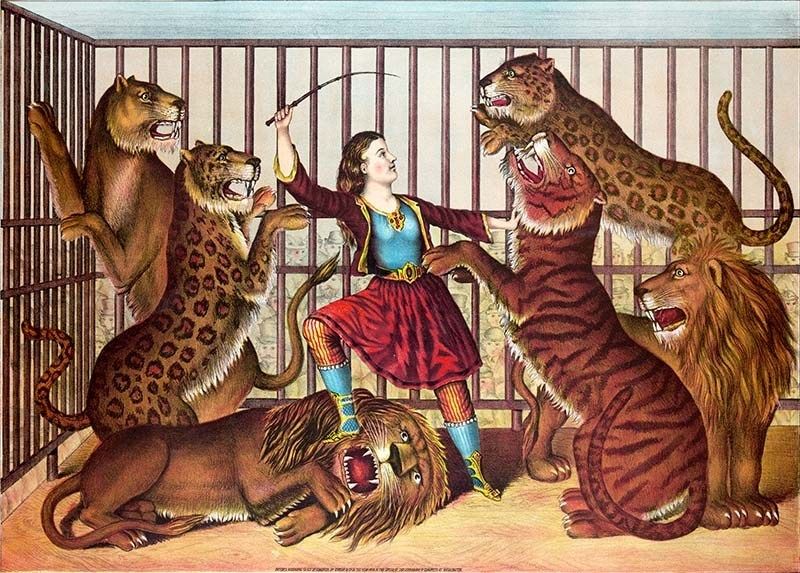 When the Baryshnikov Circus came to town everyone gathered in the streets to see the parade. Children clutched their parents hands dreaming of running away and joining the fun. Adults held their kids hands and dreamed about running away from their responsibilities.

The clowns drew a chuckle, and the acrobats tumbled; but it was the Lion Tamer that was the star of the Baryshnikov Circus. People jostled each other in their attempt to catch a glimpse of her svelte figure prowling down the center of the street with her two Siberian tigers, Clara and Lev. They were never caged, and always remained dutifully at their mistresses side.

While the Tamer’s well behaved tigers always drew a crowd; but it was Misha herself that captured the crowd’s attention. With her tight finger waves, kohled eyes, and daring costumes she was a feast for the eyes. And when strode into the center ring, her commanding presence and captivating russian accent kept spectators on the edge of their seats, and men looking on with lust filled gazes.

Misha loved being part of the spectacle of the Circus; and felt it important to maintain the illusion of her steely stage persona. When she met with her fans she was cordial to the children, sympathetic to the mothers, and aloof to all men who tried to make things personal.

However, there was only one person (other than her cats) that Misha allowed to see beyond the performance and that was the whimsical strong woman, Delilah.

One glance at Delilah years ago during a show in Tennessee and Misha was smitten. Delilah however, was unsure of Misha given her chilly persona. Yet, after a few weeks of courting and thoughtful gifts Delilah was thoroughly smitten. A few months later and they were sharing a trailer. Years passed and they were still blissfully happy together. Many ignorant folk thought that they were just friends; but the observant ones knew better. They were never shy in their affections.

The only part of Circus life that irked Misha was the tedious affections of arduous men. After every show she was pursued by men with cheap words and slimy affection. Misha always dismissed them. However, some did not pay any mind to her deflections; and those that pushed too hard…Well.. On those days Lev and Clara received an extra treat and family and friends were left wondering if their missing friend ran away to join the circus.