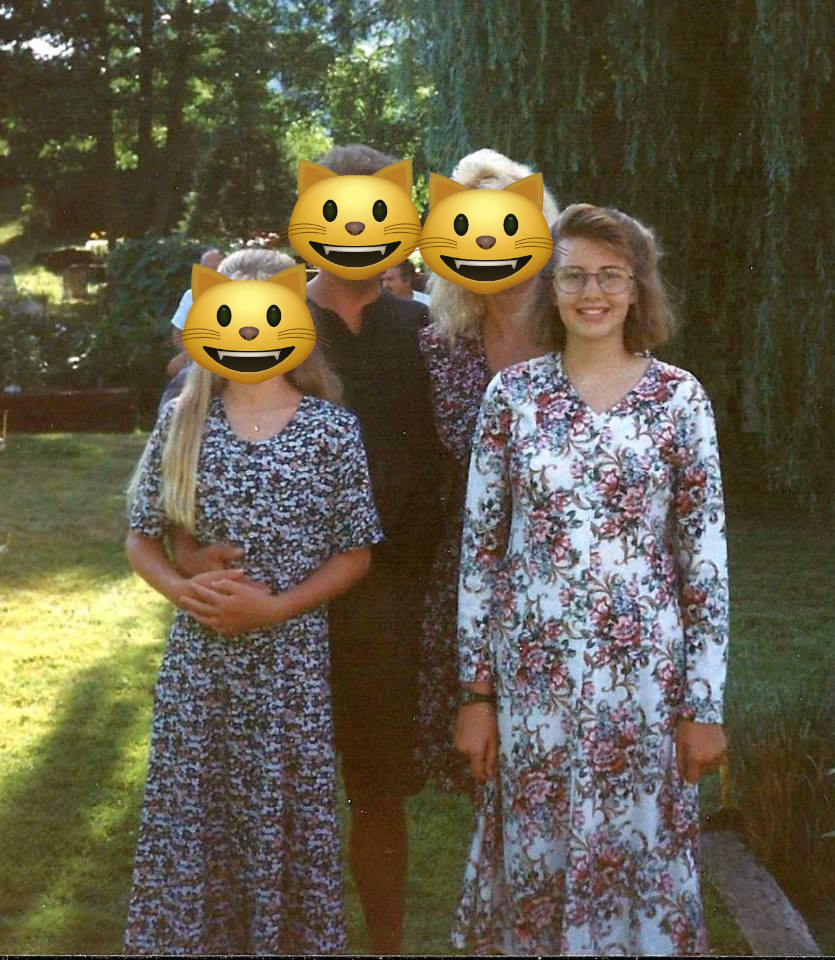 The sharper side of Grief

February 10th 2014 my step father passed away. His passing seemingly acted as a catalyst for my life shifting sideways in a lot of ways after. I lost not only him, but in the years since he’s passed I’ve severed my relationship with my mum, lost my father in-law, and my father got sick and had to have major surgery. Losing my step father however, has been one of the toughest challenges in my life. WIth my mum, and father in-law there is the grief of losing someone, and in my FIL’s case missing that person in your life. Yet, the edges of the break are a lot cleaner and not as sharp. Losing my step dad was sudden, unexpected, and heart breaking. It was a splintering kind of break and I still feel sharp jabs from the grief of it.

My step-father and I had a very tumultuous relationship. He and my mum got together when I was, I want to say, 9 (my memory is a tricky thing with a lot of blank spaces and keeping things in a timeline is very difficult for me). We did not get along from the very beginning, the why of the question is lost to me. I know though, that I was a very difficult child to love or even enjoy being around. I was weird, and dealing with trauma and a shitty childhood I did not know how to navigate.

I eventually moved from my dad’s place to live with my mum and my step dad. I was not wanted, and I did not fit into their life. I was left alone a lot, and when they were home it was very stressful for me, I always felt like I was waiting for the other foot to drop and get in trouble for something. I was a lonely, sad, and distraught kid. This again, did not make life easy for any of us.  No one wants to deal with a drama queen of a child.

I eventually moved back to live with my dad when I was 11/12 because I was suicidal, and I needed to get out of that situation. It was a very difficult time for me in my life. The drama of how I ended up at my dads just caused the rift between my step dad and I to deepen. I know he really did not like me after that, and hindsight I can understand why, I cannot say I blame him.

For the next almost two decades he and I barely tolerated each other. He constantly made me feel like the biggest idiot on the planet, and made my angsty manic teenage issues even more pronounced. I did what I could to avoid him, and hope that he and my mum split up so I did not have to see him anymore. I was very vocal in my dislike, and it was mutual. I am sure it made things quite difficult for my mum.

Despite all this I really wanted a relationship with him. While he did not like me, he was ( from my perspective) so great with his own kids. He loved them fiercely and took good care of them and always enjoyed their company. I was so jealous of that, and wished I could receive the warmth from him that he gave to his kids. He had the best laugh, it was so robust and full of mirth, and he had a great smile. His comments to other friends, and his kids could be sharp, but they were not meant with anything but love.

He also really loved my mum. Their relationship had a lot of fighting, but at its core, he loved her. I could not see that then, but I see it so clearly now. He did his very best to take care of her, and give her the love and stability she lacked in her own childhood and early adulthood. He helped her transform, and to be more soft. It was a great thing to see my mum not always suffering, and struggling to make ends meet. As well, she was able to have things she’d always wanted and never had a stable relationship to enjoy.

My relationship with my step-dad started to shift into a more positive space after I entered therapy and  started to take my medication. After I became a more rational, enjoyable person to be around he softened towards me. Our relationship entered this tentative truce where we began to enjoy each others company. He joked with me, and I finally got to experience that side of him I’d always wanted directed at me.

We never talked about this shift. It was such a fragile tentative thing, and I think we were both trying to navigate this new relationship. I can pinpoint the exact moment that I noticed the shift. I cannot remember the exact reason for the day, but I he had to come pick me up because my mum couldn’t. I was so anxious to be alone with him; because it had never been a positive thing previously. However, when he picked me up he was joking with me, and engaging with me and I just felt everything relax. I just knew at that moment that everything was going to be different and better from then on.

So for a year and a half I got to start to build this potentially great relationship with him. We had some very involved conversations we’d never had before. We were able to actually enjoy each others company. Then I got the call telling me that he was gone. I just broke, and was unable to understand how deal with it. It was one of the hardest days of my life. I was not able to process it completely, and really just wanted to take care of my mum.

In the weeks, and months that passed after he died, I really began to feel the weight of that grief. There was the obviousness of having lost someone who had been in my life for twenty years; but also I feel like I was robbed of the opportunity to really get to know him. I will never have the chance to have more conversations, more jokes and more pleasant interactions. That has been really difficult for me to accept and process.

However, I am so thankful we had that fragile year and a half. I am so thankful he did not pass away and leave me with just the bad. Having that time with him really allowed me to see him, and appreciate our relationship. I know that the majority of our relationship was rough, and it left me with some trauma. However, I try to let it go. I am able to put it into perspective and see what happened between us as a set of circumstances that was exacerbated by both of our collective experiences in life.

I still grieve over the conversations that we were unable to have, and the questions I was unable to ask. I want to know why he allowed my mum to treat me so horribly. I want to know really, why he never liked me. Why was I so unwanted. I recognize however, that I do not think I could have asked those questions anyway, nor do I think I would have actually wanted to hear the answers. I try to make peace with that.

I have had some great conversations with my step siblings that made me feel a lot better.  I know that he was proud of me for going to therapy, and getting my ish sorted. I really cherish knowing that. That he saw how hard i worked. They also share their memories with me and let me see that different side of him that I was not privy to. It makes me feel like I was not left so far in the dark.

I know it’s cliche to say; but losing him so suddenly really made me realize how you need to make sure you say the things you need to say to people before you lose the opportunity to say them. I try to make sure my friends and family know that I love them and appreciate our relationship. I try to be as present as possible with my people. I want them to know all the reasons our relationship matters. I don’t want to have any more unspoken words with people who mean the most to me.