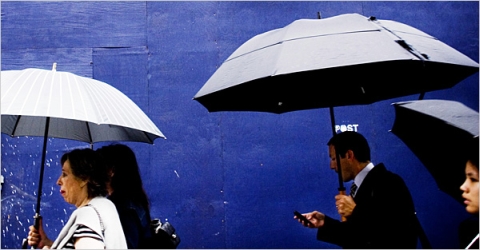 If you use umbrellas in a crowded urban space you are an inconsiderate human being. I don’t care if you are my friend or family if I will judge you just the same. If you are that hard up to keep dry then get a rain slicker and hat. They would probably do a better job at keeping you dry than an umbrella. The only good use for an umbrella is a dust collector in your closet/car.

The number one issue that I have with umbrellas is that people are absolutely unable to understand the space that they are taking up. There have been so many times that I’ve almost had someone hit me with their umbrella because they’re just wandering around oblivious. The worst is when you have a short person with an umbrella, because that means the umbrella is at face level. Nothing more fun than having to look out for people trying to poke you in the eye because they’re inconsiderate twatwaffles.

The motherfucking worst is those who have golf umbrellas. They are so huge and they take up pretty much the whole sidewalk. You have the smug bastard holding them being all “hurr hurr hurr I am dry, who the fuck cares about people able to walk by me”. I want to rip those umbrellas out of their hands and throw them into traffic. Golf umbrellas anywhere but on the golf course should result in the umbrella user being pilloried and have people throw rotten fruit at them while yelling “SHAME”.

As well, umbrellas are barely functional. Sure they block some water, but in the grand scheme of things you don’t stay completely dry. As well, most of the time people have cheap ass dollar store umbrellas that one strong wind blows the umbrella around, and quite often turns it inside out. So many times you have people walking around with busted umbrellas that are even more fucking useless.

THEN a lot of those assholes get on the bus and continue their reign of asshattery. Sure they close their umbrella, but they drip water all over everyone. Riding the bus with people is already sucktastic, but add people who are dripping water all over you and it becomes a whole other level of annoyance. Of course, because these people are inconsiderate asshats they are totally oblivious that their “comfort” is bothering other people.

The most ridiculous umbrella users are the ones who use their umbrella in the winter when it’s snowing, and in the summer when it’s not raining. You cannot protect yourself from a snowstorm with a fucking umbrella. The snow blows dumbass, you’re not stopping shit. You just look ridiculous. In the summer, if the sun is too much and you want shade on your face then wear a fucking sunhat, get a visor, or stay inside (clarification, I am referring to rain umbrellas not those dainty paper umbrellas people use)

Ultimately, to me, people who use umbrellas in crowded urban spaces just say to me that they do not give a shit about other people. That they believe their comfort and convenience is more important than the people around them. I think people like that are the scourge of society. Due to this, I have zero qualms with hitting people’s umbrellas out of my way. If I want to stay dry I do the considerate thing and wear a poncho.

In my opinion, the only acceptable use for an umbrella is this