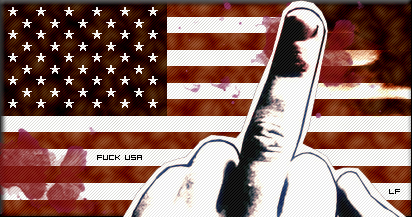 Why I loathe the US of Eh

Why I hate the USA

I will not say who brought up the fact that I focus my wrath primarily on the USA, but I feel the need to respond. So I am writing this little post to explain why I focus my rage and frustration on the good ole US of Eh. I have 5 points currently, but I am sure I will be adding to this list. I also am not proof reading this shit, I get mad enough as it is.

I mean, Russia is as evil as it gets – but at least they own up to it. They know what they are. They don’t hide it or deny it in any seriousness. Some Middle Eastern countries openly loathe                   women and take away their rights, they don’t hide it and pretend it never happened. Other countries commit mass genocide and they are known for it, it can’t be hidden.

They are brutalised by your police force and murdered just for being black by stupid cops who live in stereotypes and fear of a boogeyman put in place for centuries. Parents have to let their           kids out into the world fearing they may not come home because the strength of the USA’s racist foundation is still alive and well. Black transgendered woman are also murdered at an                     alarming rate and yet no one gives a fuck. People still don’t fucking understand why Black Lives Matter is important and necessary.

Because white people still refuse to acknowledge and accept the racist history in the USA. They distort civil rights figures speeches to suit their need to keep uppity black folk in their places.            They cannot understand why a group of people would be so fucking sick and tired of being murdered, brutalised, discriminated against, and prevented from succeeding would suddenly                  become violent. Peaceful protest my ass. White folk in the USA don’t understand peaceful, they just understand violence.