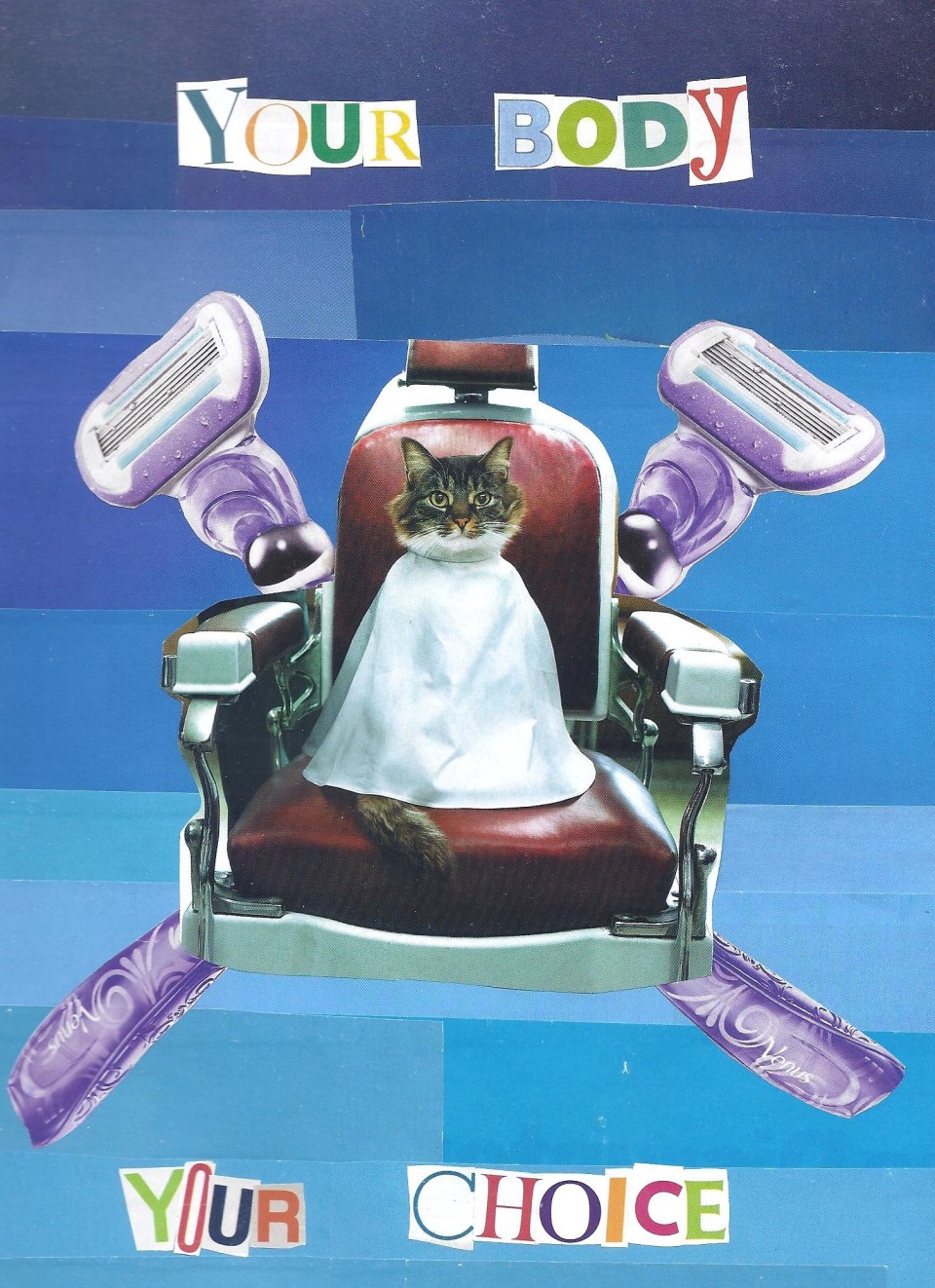 You Don’t Have to Shave It!

Tis the season to shed the winter layers and start preparing for spring, and the loathsome summer. For many women this means the arduous task of shaving off the winter fur so that they can can bare their legs in shorts. I’m not one of these women. I do not shave, and I hate warm weather.

I used to be someone who refrained from shaving just during the winter months. When Spring would roll around I would take 4 razors and about an hour and shave my legs bare. I hated doing this; and always felt resentful everytime this seasonal task came due. Shaving to me never made any sense. From the first time I shaved, to the last time I shaved it was always something I did out of some outdated gender binary and capitalist gain. When I did eventually quit shaving all together 6ish years ago, it was a very freeing experience.

I hazily remember the first time I shaved; I was camping with my mum and she told me that it had to be done. That it is just what girls do, and nothing more than that. I have always been the type of person who needs a REALLY good reason to do something. Being told to shave, when I did not want to at all, without any solid reason other than “it’s what girls do” was not enough for me. I cried the entire time I shaved.

After that, I did shave because it was expected of me, not because I wanted to. I kept up with the status quo, I did my duty. There were times during high school, and during college where I would stop shaving for chunks of time, but I’d always go back to it. In hindsight I think my resentment and waffling on shaving and not,  also stemmed from how I never FELT female. I never WANTED to BE female. Just like I used to bind my breasts to make them smaller, I didn’t want to shave because I did not believe I fit into what it was to be a woman.

Eventually later on in my life I discovered that binaries were bullshit. I began to be more comfortable with my body, and my femaleness. I understood that I would never be pretty, I would never know how to wear makeup or do my hair – but that was just trappings. It did not actually matter. This was a very liberating discovery for me. I let my hair grow out, I stopped wearing unflattering clothes, I let myself be free to be me… somewhat. I still continued to subscribe to that capitalistic beauty ideal that was shaving.

I know I am not alone, women have been shaving for millennia. However, shaving in the capacity that it is now, a behemoth of body shaming and capitalist greed is thanks to the Gillette company. Heading into the 20th century, women’s fashion was changing. Women were starting to bare skin, they were freeing themselves from the buttoned up fashions. In 1915 Gillette released their first women’s razor, and with it came an advertisement shaming women for their armpit hair.

During the 20’s Harper’s Bazaar hopped on the body shaming bandwagon and released an article about women’s armpit hair. Heading into the 40s leg hair began to be the target of shaming and with the shortage of nylons due to the war, more women shaved their legs so they could be bare legged. By the 1950’s having no body hairy was conflated by advertisements as being “classy” and ”feminine”. Gillettes misogyny continued to come into play with their debut of “debutante” razor which offered women the opportunity to stop being afraid of razors and get a close shave. By the 1980s Gillette’s advertising had effectively brainwashed women into believing that to be sexy and wanted by men they have to shave.

Now, women shave. They do not question WHY they shave, the internalized misogyny and brainwashing is so complete it’s seen to be as natural as breathing. They pass on that internalized misogyny and brainwashing to their daughters generation after generation.  Women firmly believe that it is the right thing to do. Stating that they like the way it feels in the same breath has has tedious and time consuming it is. Spending hundreds of dollars on products that only exist because a companies greed and brilliant advertising successfully spent a century making women feel like shit about their bodies and tricking them into seeing hair as unnatural.

The hilarious thing to me is that we currently praise gillette. We give them accolades on their conversation surrounding toxic masculinity, and their current social media advertising fat women frolicking in a bathing suit. Fuck that. Fuck them. They make billions of dollars in revenue from making people hate their bodies. Enforcing harmful ideals of masculinity and femininity. They are an enemy, not an ally. They are just cashing in on current trends.

It’s interesting to me that women just accept body hair as being unnatural, that there is very little pushback on the topic of shaving (other than the pink tax). I know that there is SOME push back, you see articles posted on social media surrounding people who decided to eschew shaving. You also see some of the most ridiculous myths people believe about women’s body hair in the comment sections that make me chortle. I just want to say, for the record, that women’s leg hair and armpit hair does not grow infinitely. It eventually will stop. If you are maintaining basic hygiene (deodorant and soap) you don’t smell. It’s only itchy and uncomfortable if you don’t moisturize your legs. Dry skin can be itchy and uncomfortable for everyone.

My decision to stop shaving was personal. I just could not justify doing it anymore. It really really bothered me. One day, because I am an over emotional cry baby (and that is okay) I broke down in tears and told my husband I did not want to shave anymore – I was asking his permission (which, was rather fucked). Because really, me continuing to shave was more for him than it ever was for me. He told me to stop being so dramatic, and if I did not want to shave than I shouldn’t with the caveat not to touch him with my legs.

So I stopped. The first time I went out in bare unshaven legs was the most liberating, confidence boosting event of my life. I felt beautiful, and strong – in a way I had never before. I expected some push back, and snide comments from the general population; but the truth is – no one cares. I get shocked and disgusted looks sometimes, but to be honest, I’ve always gotten unfavourable looks leveled in my direction so in the words of Jinkx monsoon, “like water off a duck’s back” (okay, I KNOW she did not create this saying but she’s the one I hear saying it so neener).

As my leg and armpit hair grew (and stopped, because seriously) it got really soft. My husband does not mind my legs touching his anymore. I love feeling the wind blow through my leg hair, and rubbing it when I’m stressed – it’s a sensory thing that I find very soothing. I do not care if people shave, that’s their ish. I DO care that people still shave without questioning it, and enforce the binary of their daughters shaving without giving them the tools to understand WHY they shave and that they do not have to.

The other thing that bothers me is that shaving, and it being seen as the quintessential female/feminine activity is harmful. That many trans folk who transition into being female feel they need to adhere to these extreme feminine binaries. Masculine women are just as valid, just as sexy, just as loveable. We need to stop equating masculine and feminine to sex and gender. We need to stop saying that to be wanted and attractive you have to shave. This is further binaries that need to be broken the fuck down and eliminated.

In the immortal words of Frank Tovey from Fad Gadget “You don’t have to shave it!”. Choose your own path. Be your own person. If you want to shave, fine. If you don’t want to shave that is also perfectly valid. It may be scary at first, but trust and believe it will get easier. Do not allow misogynistic advertising to continue getting away with shaming women about their bodies. When you see a woman moving through society with hairy armpits, or hairy legs – check that initial reaction of internalised misogyny that says “ew” and instead be proud that someone has the confidence to be themselves.